There is a fact that when Vietnamese people ask foreigners about which food are from Vietnam, usually the replies are Pho and Banh Mi. It seems to be that Pho and Banh Mi as world-renowned and represent for Vietnam in general. However, in Vietnam, there still many food and beverage are waiting for travelers to explore and find out. Especially in Hue – a city of dreamers that has many featured aspects from ancient arts to the traditional cuisine of Hue.  After having a trip come to Hue, I experienced so many things, but an element that I immensely admire and attentive is about the cuisine of Hue. Below here is five best traditional food in Hue that I think every adventurer should visit and enjoy. 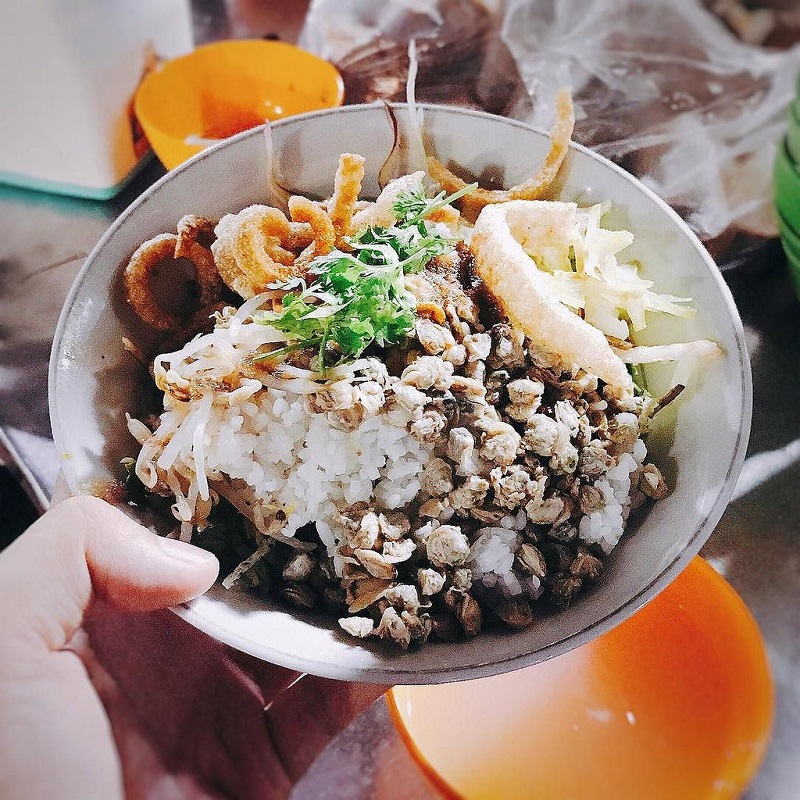 Com Hen is one of the most ancient dishes in local Hue food. For a long time ago, Com Hen is just the combination between the baby mussels and rice. But now, the local chefs in Hue has added in more ingredients and materials to make the dish full of nutrition. In a bowl of Com Hen, there are some herbs and vegetables such as star fruit, green mango, banana leaves, cilantro, onion, etc. and some fried treats like deep-fried pork and peanut. There are also has two variations for your choice, the wet and dry, or you could eat rice noodles instead of rice; it will be depended on your interested. Eat along with it, there some sauces that you can put it like fish sauce, shrimp paste, chili relish, lime juice so it could make your bowl of Com Hen has the extra flavor. 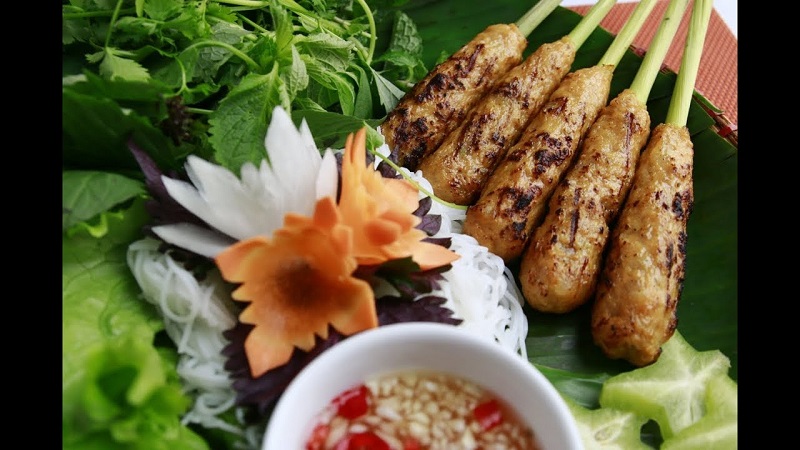 Though this food is from roadside of Hue, the quality and the taste is better than the words that people frequently underestimate it. The chefs before grill Nem Lui, they will attach the meat cover and stick with the lemongrass. Thus the flavor will increase and smell sounds over-delicious. To eat this thing you will remove the skewer first, roll the meat with herbs and rice noodles by rice paper. Then you might want to dunk the spring roll deeply into the sauce that chefs have made before. The best and most suitable time is at the mid-evening, you could replace it as a snack but still have the full nutrition as a proper meal. 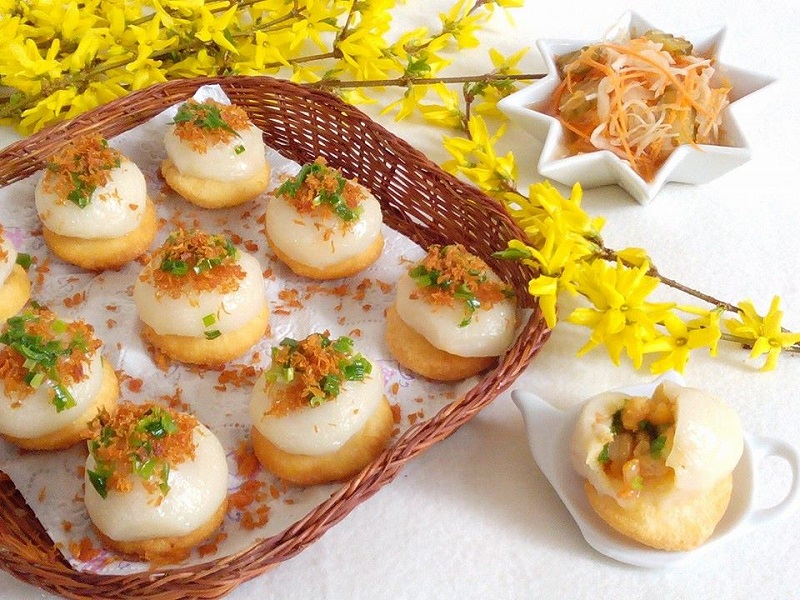 Banh Ram It Hue is a specialty because of the outside. At the bottom of the cake, the chefs fry deeply to make the rice cracker could standstill, and they could attach two more layers. The second layer is the dumpling that the inside, chefs will fill up with pork and shrimps. At the topper, there will be oil scallion and minced fried shrimp. In my opinion, if you could contain a whole cake in your mouth, just try it. Because the taste will give you a feeling of discovering the diversity of flavor. 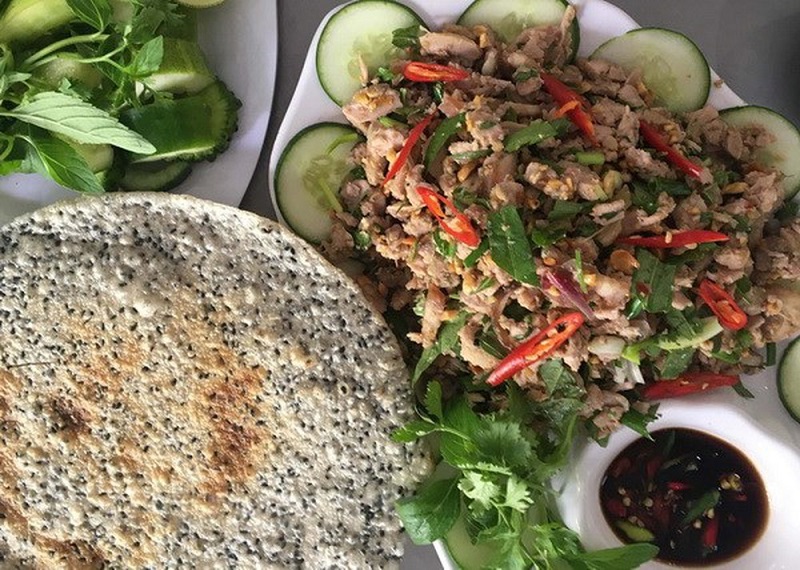 Va fruit is an exclusive fruit that only has in Hue because only Hue has the environment that could suit with it. Basically, the local people will eat this like a salad – a special Hue salad that the Va fruit will be mixed with the pork chopping, smashed peanut, chili, and some other herbs. To be different, some chefs recommend eating with the rice cracker paper because it will significantly raise the flavor of the dish. Don’t worry if you see two colors – one is brown, and another is pink of Va fruit because there are two kinds of variations of this fruit. 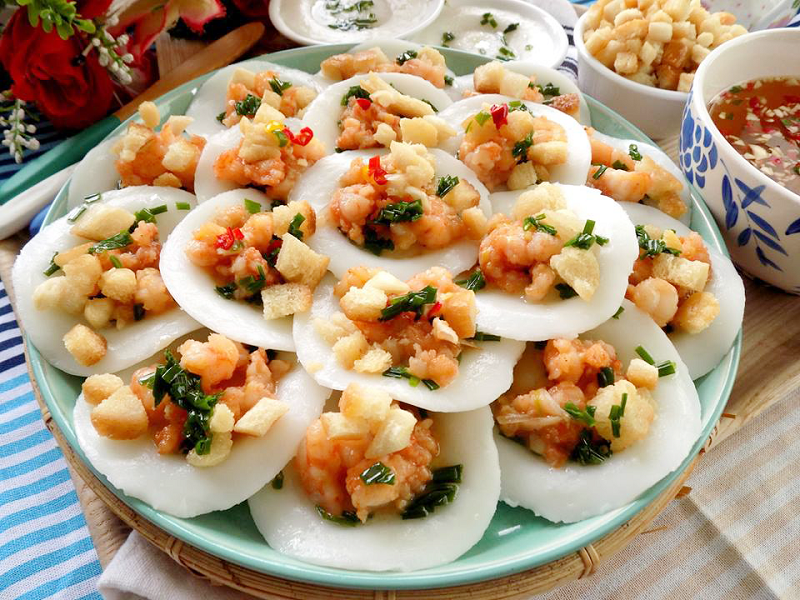 Beo cake is made by rice flour and tapioca and the shape is like a small bowl usually to contain Vietnamese sauces. Chefs after pouring the raw rice fluid made by rice flour, they will put it the stove and steam it for a while. the finished product that we have will be a jelly-cake savory. On the top, chefs frequently spread the toasted minced shrimps, oil scallion and a little bit of crispy baguette. You can eat by using a spoon and spread a little fish sauce on it Beo cake, dig it down to take the whole cake up and put straight to your mouth.

To sum up, finding Hue traditional cuisine is quite simple if you are visiting Hue because Hue is a traditional capital of Vietnam – a place that contains the most antique cuisine and culture. In fact, still, there are more traditional Hue dishes that waiting for you to seek. Just once go to Hue, you will be eye-opening because of its beautiful culture and cuisine.